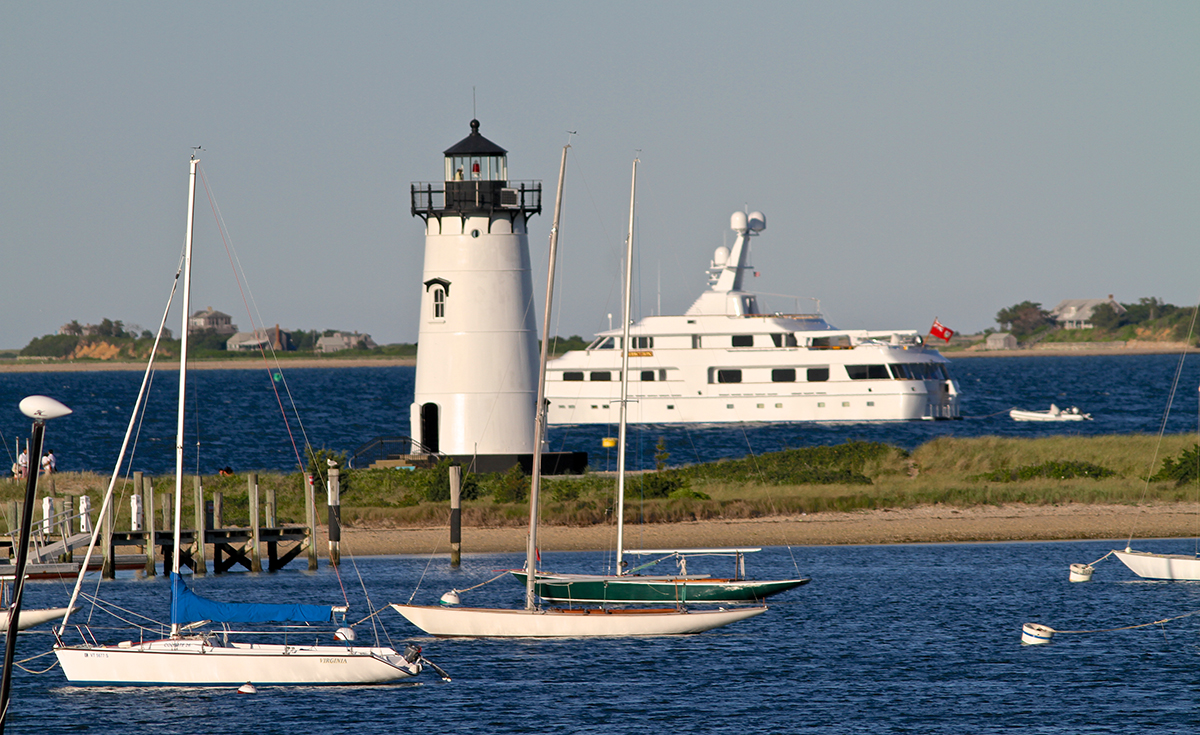 Martha’s Vineyard is the third largest island on the East Coast after New York’s Long Island and Maine's Mount Desert Island. Accessible only by ferry or plane, "The Vineyard" is one of the world’s most unspoiled environmental assets with a storied American history that dates to the 1600s.

The 100-square-mile island is one of the most desired destinations for weddings and a unique maritime location for meetings that can incorporate a flavor of America's sea-faring past. Martha's Vineyard has numerous towns and villages, including Edgartown, one of the two oldest incorporated English settlements on The Vineyard. Edgartown rose to prominence and prosperity during the New England whaling industry boom in the 19th Century, and descendants of the island’s founding families and generations of summer residents and conservationists have since helped preserve its historic character and treasured natural assets. Edgartown, which is also the sole port of call for Chappaquiddick Island, is a 3,800-acre land mass with barrier beaches dating to the Ice Age and kettle-hole ponds and forests meticulously tended by state and local conservation organizations.

A meandering stroll on this Short Escape through Edgartown's historic district evokes a walk back in time to the days of the earliest English settlers, wealthy whaling captains and prosperous entrepreneurs who made their living from farming, fishing, retailing and, eventually, tourism. The Sheriff's Meadow Sanctuary, which is relatively hidden in the town center, was formerly the property of 1850s Sheriff Isaiah Pease and can also provide a glimpse of yesteryear. It has a short walking trail through a sanctuary with rare plants and animals and provides scenic views of Nantucket Sound and Eel Pond. From the 1940s, the 10 acres have been the backyard of Henry Beetle Hough, who for six decades was the self-proclaimed “country editor” of the Vineyard Gazette. He used the newspaper's commentary page as a naturalist pulpit to describe in loving editorials the green-gray hues of Nantucket Sound at dawn and dusk and the songs of chickadees, robins and red-winged blackbirds. In 1958, Hough sold the magazine rights to his latest book, and, with his wife Elizabeth, used the proceeds to buy the 10 acres and establish the Sheriff’s Meadow Foundation.

A good starting point for discovering Edgartown is the village green or commons, a classic feature of a 17th-Century New England settler town. The Vincent House, built in 1672 and the oldest residence on The Vineyard, sits on the commons. It is believed to be the house of William Vincent, an early English settler who arrived on the island in 1655. Originally built on farmland outside town, the Vincent House was moved to its current location in 1977 by the Martha's Vineyard Preservation Trust. The house is furnished to depict architecture and life on the island throughout the last four centuries. In the spring, cherry trees and azalea bushes in full bloom on the commons are a special treat.

A few steps from the Vincent House are two other whaling-era buildings that have been restored by the trust and are open to the public. One is the Dr. Daniel Fisher House, an elaborate Federal-style home built in 1840. Fisher founded one of Edgartown’s first successful companies to produce whale oil and candles. His house, at the top of Main Street, was a showplace then and remains one today. In 1992, the mansion was redecorated by the trust as the first Martha's Vineyard Designer Showhouse. The house is used today as an elegant option for private parties and wedding receptions. 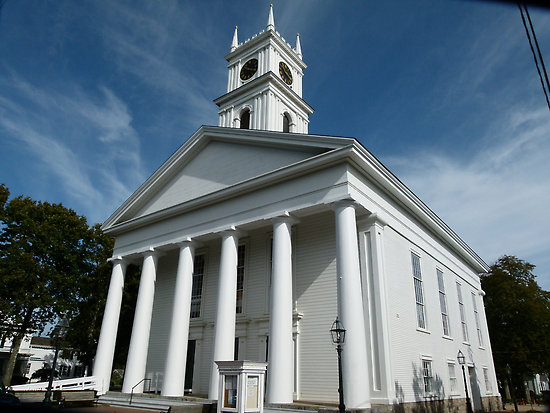 Next door is the Old Whaling Church. This stately  landmark was designed by architect Fredrick Baylies Jr. for Edgartown's wealthy Methodist whaling captains. According to a wonderful short film about the church that is narrated by Trust director Chris Scott, these pious captains of the whaling industry had the means to build “anything they wanted.” What they wanted was a church modeled after the Parthenon and a Gothic tower on top with a bell that could be heard throughout the town. The stunning structure they created is one of the finest examples of Greek Revival architecture in New England. In 2013, island artist Margot Datz completed restoration of a tromp l'oeil mural that had been lost for centuries behind layers of paint. The church is also a performing arts center and is sometimes booked with the Dr. Daniel Fisher for group functions.

Between 1835 and 1845, 110 whaling captains built homes and lived in Edgartown.  Many of the largest and grandest houses are located on North Water Street, overlooking Edgartown Harbor. Several have “widow’s walks” on the roof. These platforms were built to fight chimney fires and sometimes used by wives watching for the return of their husbands from sea.

At the end of North Water Street, the front porch of the Harbor View Hotel has a great view of the harbor, the Edgartown Lighthouse and Chappaquiddick. Follow a path to the Lighthouse, which is threaded with swaths of pink and white beach roses in the summer and sea grass and cattails in the cooler months. The path empties onto Fuller Beach, which wraps around the harbor and is a quick stroll in the summer to feel miles away from the bustling town. 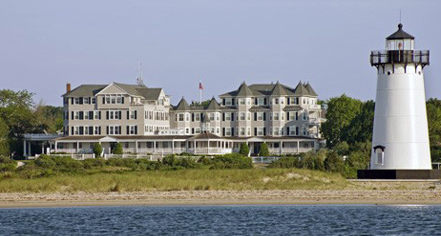 The Vineyard Gazette offers a good map of historic streets with a selection of 15 historic homes, churches, buildings and other sites to visit. The Benjamin Smith House, built in 1760 and headquarters for the Vineyard Gazette, is recommended. For a look at a slightly modernized, broadsheet newspaper printing press, their door is open. Other favorites are The Federated Church (1828) and St. Andrew's Episcopal Church (1899). St. Andrews features stained-glass windows made and signed by Louis C. Tiffany and a pulpit that is the bow of a dory from the schooner, Northern Lights, which once was the largest ship in Edgartown Harbor.

The Martha’s Vineyard Museum on Cooke Street was established in 1922. It is the most comprehensive archive and showcase of Edgartown and island history.

The Northmen were the first Europeans to visit Martha's Vineyard. They landed about the year 1000 and called the island "Vineland." The Wampanoag, one of several American Indian tribes who inhabited the island before English settlers, called it "Noepe," which means "in the midst of the sea." Bartholomew Gosnold, an English lawyer and explorer, led the first recorded European expedition to the New England coastline in 1602. He also was one the founders of Jamestown in Virginia. Gosnold named the New England discoveries "Cape Cod" and "Martha’s Vineyard." Martha was purportedly his daughter or a close relative.

Thomas Mayhew, a wealthy English merchant and settler from Watertown, outside Boston, purchased land around Edgartown’s harbor on the southeastern end of Martha's Vineyard in 1641 from fellow English settlers.

In 1642, Mayhew’s son, the Rev. Thomas Mayhew Jr., led a group of families who started a colony there. In 1651, he established the first school on Martha's Vineyard to educate native Indian children and young Indian men. Peter Folger, the school’s first teacher, was the grandfather of Benjamin Franklin. His descendants still make their home on the island.  The colonists incorporated the area in 1671 as Edgar Towne, bordered by Nantucket Sound to the northeast and the Atlantic Ocean to the south. The name came from Edgar, the son of King James II of England, who died in 1669, two years after his birth. Unlike many New England towns with counterparts in England, there is only one Edgartown in the world.

Insulated by miles of ocean, Martha’s Vineyard residents have always been fiercely protective of their way of life. Until the first development boom in the 1970s, very little changed. Fortunately, residents have worked hard over the last three decades to make The Vineyard a role model for smart growth, or sustainable development, in a coastal community. Today, Edgartown and all Martha's Vineyard towns are still places where people can walk to schools, the post office and shops that are close to ponds, woods, fields and beaches. Absent are the four-lane roads and strip malls found on Cape Cod. Vineyarders are proud that there are no stoplights or burger chains on the island.

There are multiple nonprofit stewards of Martha’s Vineyard’s environment. Two play prominent roles in Edgartown and on Chappaquiddick: The Trustees of Reservations, a state organization that preserves properties with “exceptional scenic, historic and ecological value,” and the local Sheriffs Meadow Foundation, which was started in Edgartown and now owns and maintains properties all over the island.

How to be Happy on Chappy

Known as "Chappy," the island of Chappaquiddick is part of Edgartown and east of it. The first secret to happiness on Chappy is to not look for the infamous Dike Bridge Ted Kennedy drove off in 1969. It was torn down to build a wider footbridge over the striking blue water and delicate grassy inlet that are adjacent to a barrier beach and the Cape Poge Wildlife Refuge. 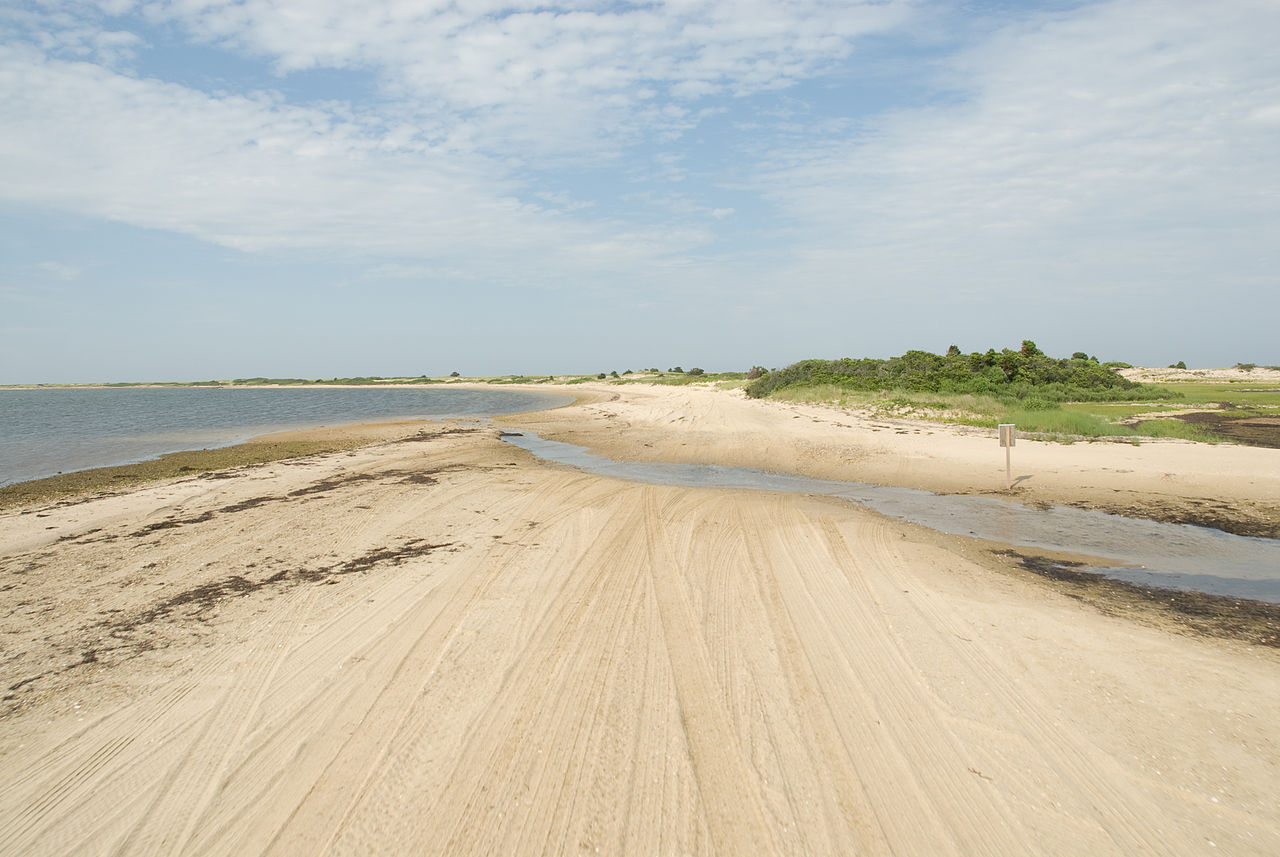 The refuge is nearly 1,000 acres of land conserved by the Trustees of Reservations. At the sand barrier's northern tip is the Cape Poge Lighthouse. It was first built in 1801 to guide ships through the shoalwaters and shallows of Muskeget Channel into Edgartown Harbor. Storms and erosion twice destroyed the lighthouse. It was rebuilt in 1844 and 1893; the latter reconstruction still stands today. The lighthouse flashes a bright white light 63 feet above the sand dunes that can be seen by ships at sea nine miles away.

With the population rising from about 17,000 to more than 100,000 during the peak summer season, it's fortunate that locals and others who love The Vineyard have worked hard during the last three decades to make the island a role model for smart growth, or sustainable development. In all towns, all towns, people can still walk to schools, the post office and shops that are close to ponds, woods, fields and beaches. Unlike neighbor Cape Cod, there are no four-lane roads, stoplights, strip malls or burger chains.

To truly appreciate Martha's Vineyards' natural and historic attributes—and quietly walk through Edgartown without sidewalk crowds—the shoulder seasons of late April to the end of June and September through October are the times to visit. There is an annual food and wine festival in Edgartown and a film festival in Vineyard Haven in September, and the annual Martha's Vineyard Striped Bass & Blue Fish Derby runs from mid-September to mid-October. In December, Christmas in Edgartown has become an annual weekend of holiday cheer (see Things To Do section). From January through March, everything shuts down. Even the butchers, bakers and fishmongers whom locals depend on close their shops and head off the island for a warm break.