Home > Find an Escape > Upper Keys, FL The Eighth Wonder of the World

Meetings & Event Options: A handful of luxury waterside resorts with meeting and event space that can handle a small wedding, an incentive trip or a major conference. 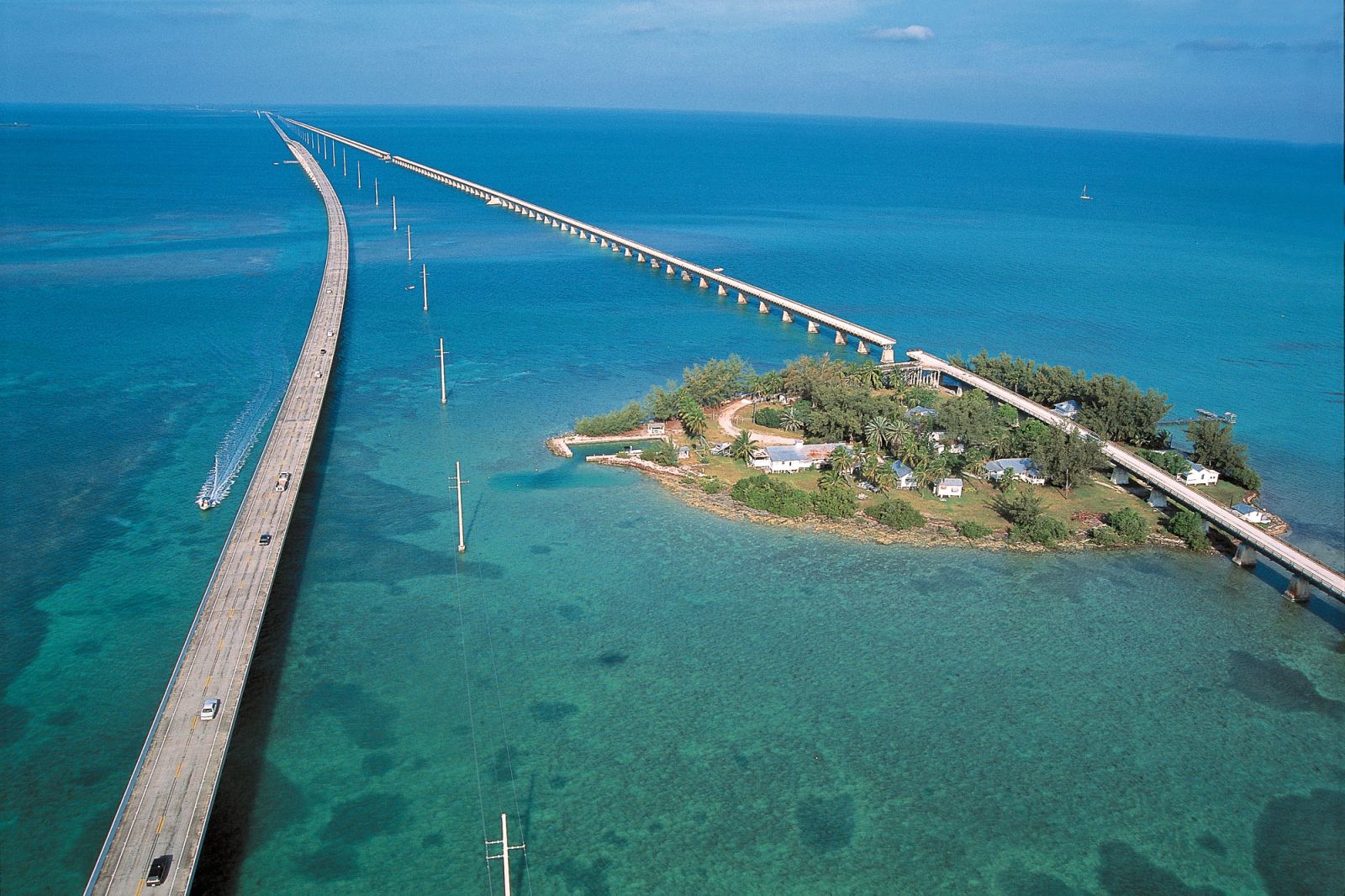 The Florida Keys is a different world—an arc of beautiful, tiny islands that are flat and sandy, and rough around the edges with palm and mangrove.  Except for a handful of top-shelf resorts tucked away on large tropical tracts, it’s a land of low-slung hotels, roadside seafood joints, bait and tackle shops, modest marinas, lush waterfront parks and side roads that dead-end into tiny inlets with crushed-shell parking lots. This is Old Florida, the way it was before the South Beach crowd and theme parks took over.

At the beginning of the 20th Century, the Florida Keys were an isolated chain of backwater towns, leisure communities and small fishing camps only accessible by boat or seaplane. Then, Standard Oil magnate Henry Flagler decided to extend his Florida East Coast Railroad south from Florida City to Key West to take advantage of new trade opportunities offered by the recently completed Panama Canal. This was no small undertaking, considering that some of the keys were separated by as much as seven miles of open water, a major obstacle to building railroad bridges.

Nonetheless, Flagler persevered through hurricanes, mosquitoes and logistical challenges that still boggle the mind today. On Jan. 22, 1912, he emerged, at age 80, from his private railcar in Key West to celebrate the completion of the 127-mile Florida Overseas Railroad, dubbed the "Eighth Wonder of the World."

Flagler’s interest in Florida originated from a trip to Jacksonville in 1878. His first wife, who struggled with serious health problems, was told by her doctor to seek out a warmer climate, and Flagler found the area to his liking. After a second trip to St. Augustine a few years later, he decided to get into the hotel business, constructing the 540-room Hotel Ponce de Leon. To provide better transportation service to his new hotel, he also purchased the Jacksonville, St. Augustine & Halifax Railroad, which would form the basis of today’s Florida East Coast Railway system. 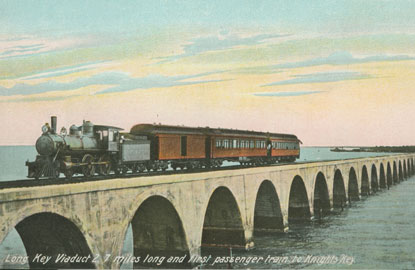 The 127-mile Florida Overseas Railroad was plagued by slow speed limits over the bridges and numerous tropical storms. It operated until the powerful Labor Day Hurricane of 1935 destroyed the middle section of the line. The company deemed rebuilding too costly and sold the railroad to the state of Florida. The state converted the abandoned right-of-way and bridges into U.S. Highway 1, enabling the major road to extend all the way south to Key West.

The 23 Flagler railroad bridges still intact today form the majority of the Florida Keys Overseas Heritage Trail (FKOHT). Hikers, bikers and walkers can travel the path of this famous railway while enjoying sweeping views of the keys and contemplating Flagler’s historic achievements. They can also stop at the Pigeon Key Foundation & Marine Science Center just south of Marathon to learn more about the man and his legacy of ingenuity and perseverance.

The Florida State Parks website has an entire page dedicated to the Florida Keys Overseas Heritage Trail. The longest continuous section of paved trail, which is perfect for an extended weekend hike, is the 34-mile stretch between mile marker (MM) 106 at Key Largo and MM 72 at Islamorada in the Upper Keys.

Other long segments, such as the 15 1/2-mile paved trail between MM 106 and MM 90 in Key Largo, provide opportunities to walk the old railroad right-of-way. While walking, one can imagine what it must have been like for train passengers in the early 1900s to find themselves suspended above the blue waters of the Gulf of Mexico as if they were flying.

Shorter hikes include the 4 1/2-mile stretch that connects the city of Layton (MM 68.5) to Long Key State Park (MM 67.5) and the Long Key Historic Bridge (MM 64). At MM 65.8, the Edgewater Lodge sits on the other side of U.S. Highway 1 from the former site of Henry Flagler’s Long Key Fishing Camp.

Flagler constructed the camp using the old barracks that once housed the workers who built the Florida Overseas Railroad. He turned the camp into a world-class resort, the Long Key Fishing Club. It boasted some of the best fishing in the world and attracted U.S. presidents and other luminaries such as William Randolph Hearst and Ernest Hemingway. Author Zane Grey was elected the club’s first president in 1917 and reportedly wrote some of his novels while at the resort. 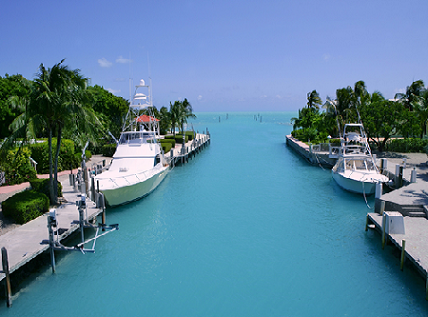 There’s more history along the four-mile segment between the Islamorada Library at MM 81.5 and Windley Key Fossil Reef Geological State Park (MM 85.3). The library was built as a hurricane refuge school after the Labor Day Hurricane of 1935. Across from it is the Florida Keys Memorial, a sacred monument containing the remains of some who lost their lives in the storm. The bronze plaque is inscribed: “Dedicated to The Memory of the Civilians and the War Veterans Whose Lives Were Lost in the Hurricane of September Second 1935.”

Windley Key Fossil Reef Geological State Park occupies the site of the former limestone quarry used by Flagler during the construction of the Florida Overseas Railroad. Some of the quarry’s decorative stones were incorporated into in Miami’s famed Vizcaya mansion and the Miami and Key West post offices. The park has approximately 1 1/2 miles of trails where you can observe more than 40 species of trees and plants native to the Florida Keys. 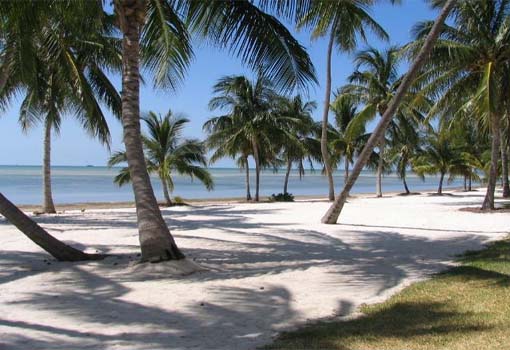