Other Places Nearby: World-class beaches; a historic lighthouse; the resort areas of East Hampton and Montauk; unique shops; gourmet dining.

Meetings & Event Options:  A few local hotels and the Montauk Yacht Club have space for meetings, events and weddings. Texans and even New Yorkers may find it hard to believe, but cowboys once drove huge herds of cattle on the panoramic seaside land you walk through in Hither Hills State Park (see Getting Here and A Recommended Walk). This narrow strip of rolling hills, sandy woodlands, and coastal beaches wedged between the Atlantic Ocean and Napeague Bay was the home of the country’s first cattle ranch during the 17th Century. For the next 200 years, Long Islanders flocked to the eastern end of the island’s South Fork twice each year for the big event: watching the herd being driven to these grazing lands in May and then back in November or December.

Today, Hither Hills State Park’s 1,755 acres straddle both sides of the two-lane Montauk Highway, the only access road to Montauk Point, the eastern tip of Long Island’s South Fork. Gorgeous Atlantic Ocean beaches rim the park’s southern edge, while the majestic beaches of Napeague Bay stretch along the park’s northern border. As you look to the east up the shoreline of Napeague Bay, tall sandy cliffs topped by green shrubs and trees tower above the beach. 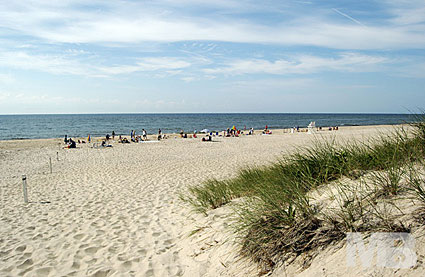 Between the bay and the ocean stands a dense forest filled with oak, pine, and Russian olive trees. Freshwater ponds such as Fresh Pond, which is so massive it could be mistaken for a lake, dot the land.