The Pass of No Return

Other Places Nearby: Pikes Peak, Garden of the Gods, Cave of the Winds, Colorado Springs, the Gold Belt National Scenic Highway.

Meetings & Event Options: Appropriate only for small weddings and retreats. The local B&Bs can help put together stunning options for small groups, but accommodations are limited. 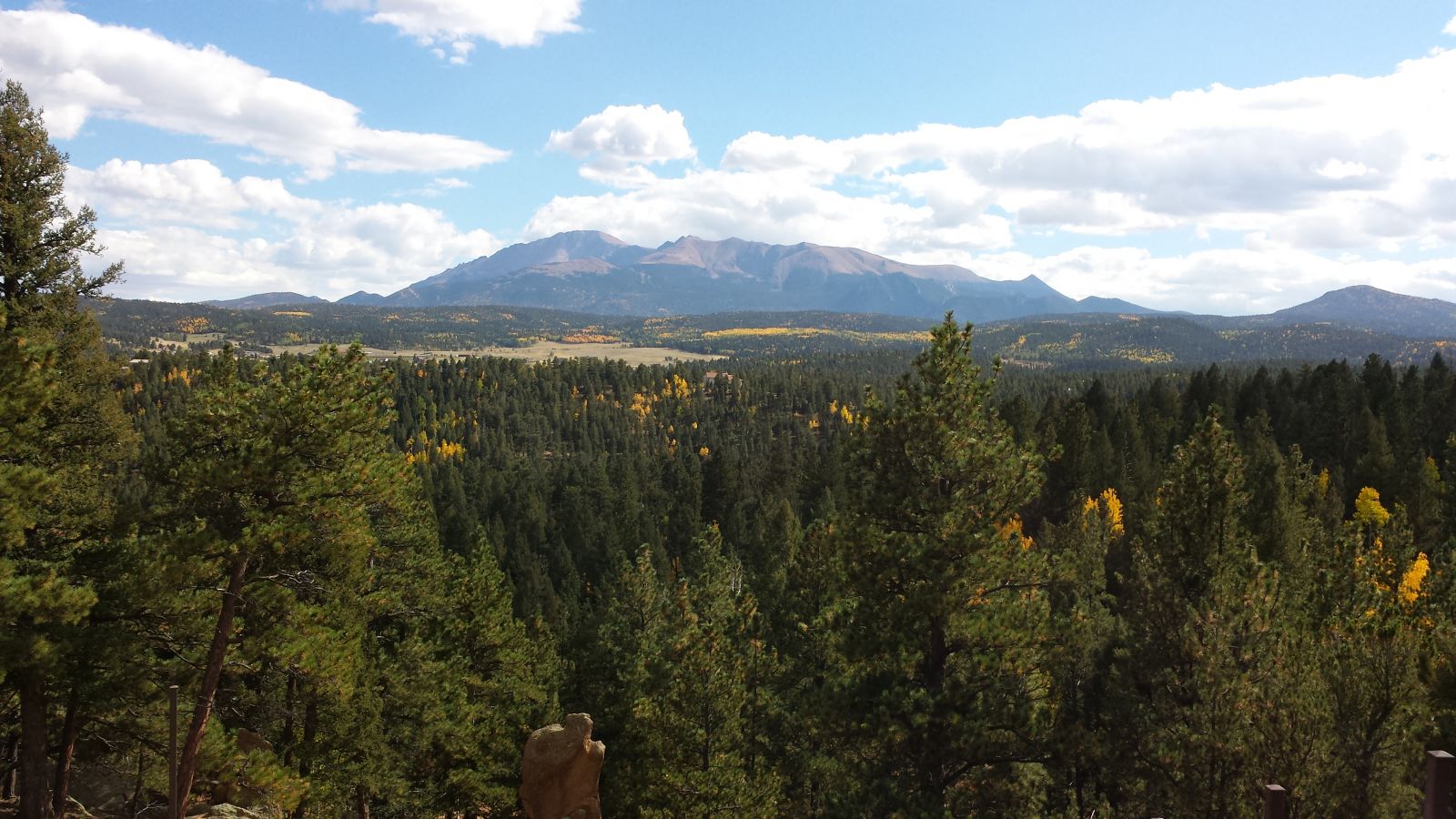 Few people think much about the significance of a mountain pass. Before the advent of trains, highways and planes, however, a gap in the mountains throughout the world attracted people in search of food, riches or a better life. Colorado's Ute Pass, one of the relatively few gaps through the front range of the Rocky Mountains, has an important place in U.S.. history and was well known in the late 1800s to early 1900s.

Ute Pass (pronounced Yute) begins just west of Colorado Springs. It was named for the Native Americans who probably used it for thousands of years to escape the searing summertime heat on the Great Plains, search for game and perhaps retreat from their enemies.

Today, bypassed by better known Colorado resort areas such as Vail, Aspen and Winter Park, Ute Pass remains a best-kept secret for people seeking to discover the heritage and beauty of Colorado not far from its main population centers. Travelers can easily arrive here in less than 90 minutes from Denver and 30 minutes from Colorado Springs. Despite the ease of access, even many people in Denver have yet to discover this wonderful valley playground for lovers of mountain beauty, history and interesting places to stay.

The valley's lack of recognition probably would have surprised residents in the late 19th and early 20th centuries. The pass was a thriving tourism attraction and a wagon, and later a railroad transportation center, connecting gold mines and farm, ranch and logging centers to Colorado’s population centers to the east. Not much gold was found in the valley, but its role as a conduit for goods and transportation attracted entrepreneurs from many parts of the country and the world seeking to find riches. Ute Pass was not only a window in and out of the Rockies but a key step en route to the flourishing mining community of Leadville, CO, or to Utah, San Francisco and other western destinations.

Ute Pass winds west of Colorado Springs up a steep canyon past the hugely popular Garden of the Gods rock formations and the Pikes Peak tourist road, which attract hundreds of thousands of tourists a year. Most tourists don’t know the wonderful escapes that await a short drive farther west on Route 24 into this broad valley to the west of the Rockies’ front range but east of the Continental Divide.

Route 24 follows the route once used by the Utes, settlers in wagons and then railroads serving the gold mines of Leadville, Aspen and Cripple Creek in the 1880s. Today, Route 24 is mostly a scenic four-lane highway that winds through the narrow, rocky Fountain Canyon to enter the undulating, moor-like Ute Valley. The railroad is gone, and only observant travelers might spot traces of the old trail along the canyon walls and in the valley to the west. The Ute Valley enjoyed only about 50 or so years of prosperity and renown between the 1880s and the 1930s before the decline of gold mining and motor transport made other regions more attractive to miners, tourists, ranchers and loggers. When planners of today's interstate road system located I-70, the main east-west artery across the Rockies, farther north through the pass west of Denver, the Ute Pass region probably lost its last chance of becoming a population center. Instead, it has preserved its charms for those who love tranquility and a sense of the past.

For the Utes, the pass seems to have provided little more than a transit point between their summer mountain encampments and their homes on the plains in the winter. There is little evidence of sustained settlement in the area, although the remains of a Neolithic human were found in the region. The Utes did leave signs of their presence, though, in trees—ponderosa pine with large gouges slashed in the bark at the base probably for medicinal purposes. You can also find prayer trees, pine stumps that were lashed to the ground over the years so that they grew horizontally toward Pikes Peak. Its rocky summit, at a height of 14,000 feet, towers about 5,000 feet off the valley floor. Ask park rangers at Mueller State Park or Fossil Florissant Fossil Beds National Monument for information about where to find the Ute-marked trees. 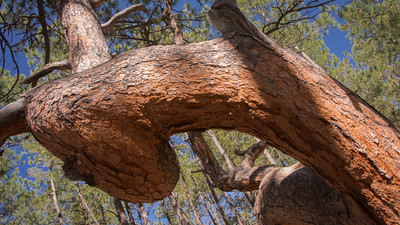 Along the original wagon trail built to follow the Native American trail, and later the railroad line built in the 1880s, little towns were founded at stations for changing horses for long-distance stages and then to provide water for steam trains or food for rail passengers. These towns were named Manitoba Springs, Cascade, Chipita Park, Green Mountain Falls, Woodland Park and Divide, and all survive to this day. While the wagons and later the railroad serving the gold mines also attracted ranchers, loggers and farmers, one of the biggest sources of growth came from tourism.

A Getaway for the Well-to-Do

Many Americans assume that tourism is a relatively recent phenomenon. Tourism, though, goes back at least to the time of medieval Europe when wealthy travelers often took their vacations as pilgrimages to holy spots. The so-called Gilded Age of America in the post-Civil War era saw a surge in tourism development, as the middle class created by the Industrial Revolution partook in the age-old desire to get away. (Native Americans also frequently changed locations with the season.) With the arrival of trains came a variety of developers with various schemes to promote tourism, and this valley, now suffering from a dearth of places to stay, once bustled with large hotels and comfortable camps with well-furnished canvas tents on wooden platforms.

Cascade was home to the large, elegant Ramona Hotel, which attracted visitors to the Pikes Peak Toll Road, built first in the 1880s as a carriage trail requiring a day-long trip. Catherine Lee Bates conceived the verses for “America the Beautiful” after visiting the mountain.  Despite the efforts of a Chicago billboard kingpin to further develop the area, he died before he could proceed, and the resort went out of business.

The nearby town of Green Mountain Falls enjoyed a period of popularity as a tourism site for a short while. In 1888, a lake was created with an island and gazebo, and a series of streets connected about 100 tent-cabins on the hillside above the lake. The resort attracted many guests, drawn by the ability for mothers and children to enjoy the summer’s mountain air while enabling fathers to visit on weekends by train. Elaborate resorts for the time were also developed in Chipita Park and Woodland Falls, which both enjoyed a decade or two of popularity before their respective declines. Several dude ranches also prospered in the area for some time, run by ranchers looking for ways to supplement their income. You can stay at perhaps the only remaining lodge from that time, the Chipita Lodge.

Ute Pass also had its share of unique resort experiences. One lodge in aptly named Crystola prospered for some years as an escape for lovers of the occult, featuring séances and other mystical experiences. This spiritual community became the center of a small controversy. After one spiritualist had a vision that there was gold in the area, investors put large sums of money into the search, and an ore-processing mill was constructed to process gold that was never found. The mill was never opened, and people lost a lot of money. The spiritual element of a more conventional kind lives on in the valley in the form of religious retreats operated by various denominations. In what is now the beautiful Florissant Fossil Beds National Monument, large quantities of petrified redwood trees were carted away by tourists in the late 1800s. Wealthy guests actually paid to dig for them for a woman who had ostensibly developed a resort in pursuit of her interest in paleontology. Ironically, in so doing, many precious specimens were lost. The resort, which offered a commanding view of the valley and the petrified forest, was razed, but its location can still be enjoyed on one of the walks in the park. See Outdoors. 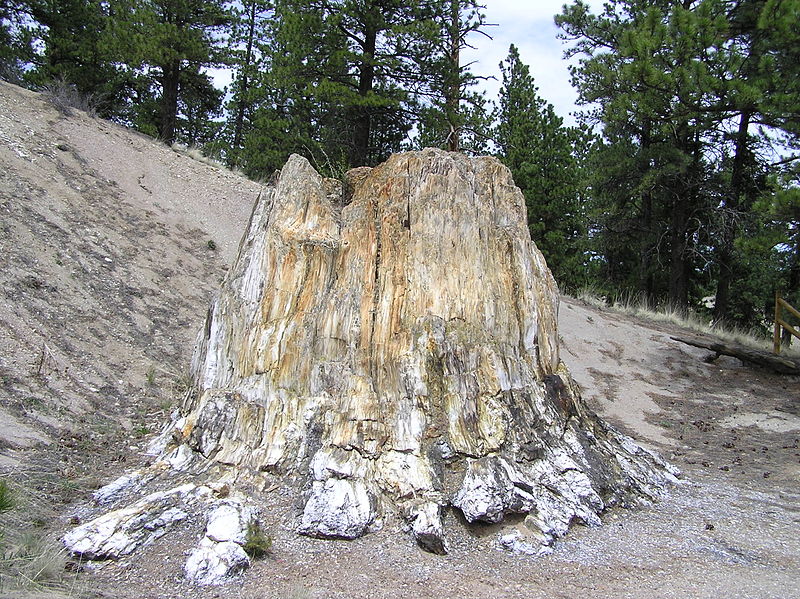 Driving through the rolling hills of the uncultivated valley, it’s hard to believe that large farms and ranches once flourished. The area was known for its iceberg lettuce and potatoes. Some say the climate now is too warm for these crops to grow there. The carefully preserved homestead of late 19th-Century settler Adeline Hornbek is open to visitors in Florissant, near the fossil park.

Today, the tourism industry, ranching and logging remain, but they are much less active, and the train is gone. Few, if any, of the entrepreneurial ventures hatched in past centuries appear to have provided a long-term return on investment. The string of Ute Pass towns provides services for travelers on Route 24 heading to and from the mountains, and is home for commuters to Colorado Springs.

The towns offer numerous hiking and other outdoor activities, and the valley has several centers for the care and preservation of wolves. The big hotels are gone, but visitors will find some charming, upscale B&Bs that offer wonderful escapes. There are also various restaurants, some in historic locations, offering a variety of local and international cuisines catering to a prosperous community of summer and year-round residents.

Ute Pass--A Quick History by Jan Pettit  at Amazon.com or Barnes and Noble