Home > Find an Escape > Torcello The Ghost Town of Venice

The Ghost Town of Venice

The Highlights: A picturesque vaporetto ride from Venice to a quiet island; a 10th-Century Byzantine basilica with dazzling mosaics; a meal or a stay at a legendary hotel where Hemingway wrote; a country villa presenting contemporary art.

Other Places Nearby: The beautiful pastel-colored village on the island of Burano, the glassmaking island of Murano. 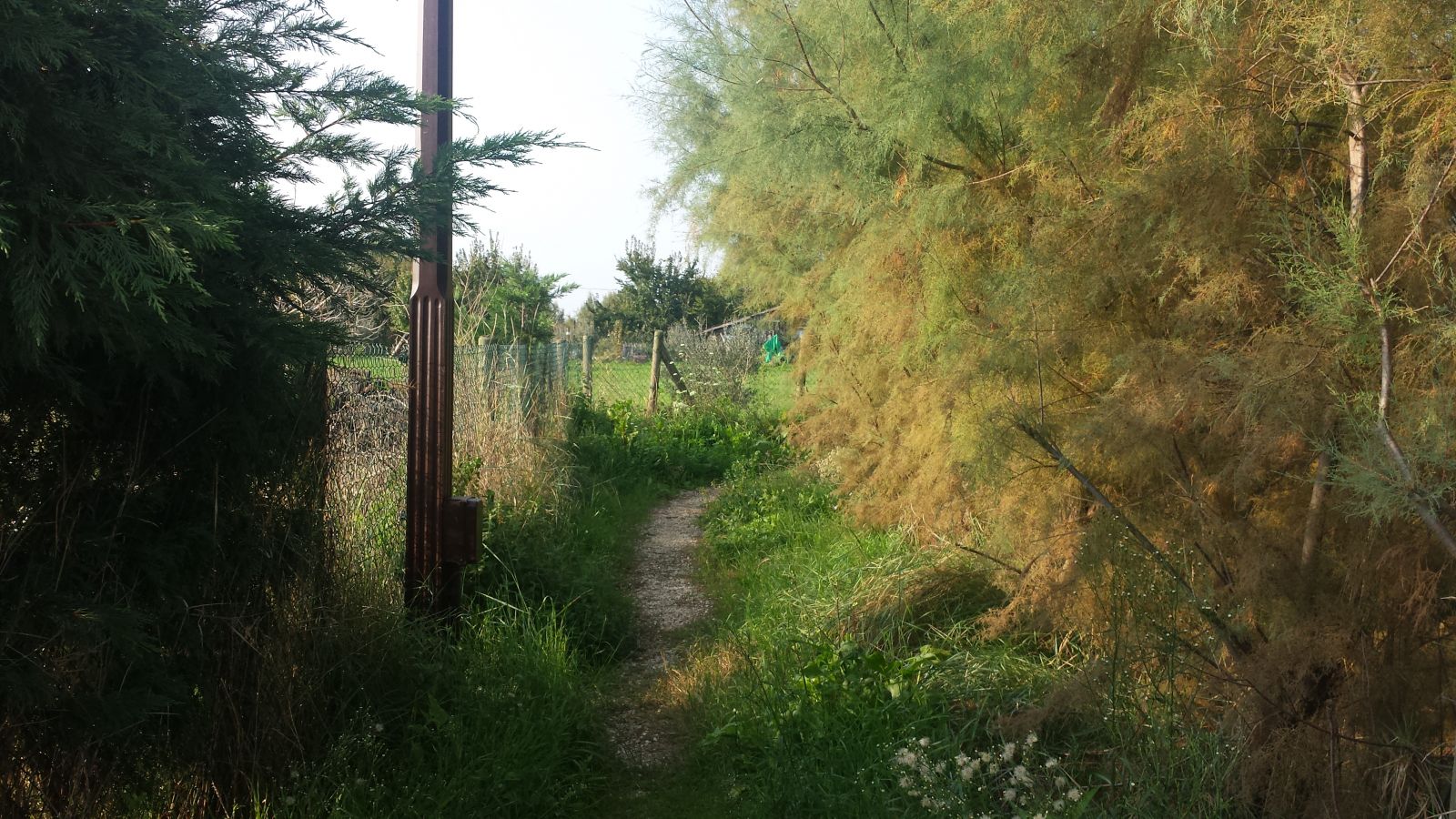 A short escape by vaporetto from Venice's teeming piazzas and attractions to the peaceful island of Torcello brings calm and a warning of how nature can ruin a great city. Torcello was once the main city in the region but a massive build up of sand ruined its harbors and trade. That may be a warning to Venice's current leaders of what could happen if they fail to properly manage a complex, controversial water management system now in place to prevent extreme flooding from devastating one of the world's most beautiful cities.

Despite Torcello's fall from the ranks of great cities, it still attracts many of the world's luminaries. The island is not an obvious selection for Short Escapes, though, because it lacks options for walkers or outdoor enthusiasts. The longest walk is less than two miles to see a magnificent Byzantine basilica and an adjoining campanile and medieval church. You'll pass a B&B with a beautiful setting and a private modern art gallery. The stroll will also take you over a renovated medieval Devil's Bridge spanning a small main canal and through a local field. (See A Recommended Walk section.) What one gives up in the opportunity to take a long walk in the countryside, one gains from the serenity, the history and the magnificent early Middle Ages churches, and possibly a great meal and a romantic place to stay.

Add to this the fun of the vaporreto ride across the lagoon, which offers wonderful views during a short journey. If you’re lucky, you’ll see the glistening city of Venice during sunset and, on a clear day, the towering, snow-crowned Dolomites Mountains in the distance.

The great republic of Venice was born on the tiny, almost deserted island of Torcello, where sea winds and the smell of salt air replace the hustle and bustle of the city of Venice. Now, besides the medieval churches, only brush, patches of forest, fields, canals, and a few houses, restaurants and inns remain.

The Mother of Venice

In the middle of the first millennium after Christ, northern tribes wreaked havoc on the people who inhabited what is now generally known as the region of the Veneto in northeastern Italy. Much of the region is composed of the agriculturally rich valley beneath the eastern Alps known as the Dolomites. To escape the invading tribes, local inhabitants found refuge on an island in the lagoon behind the barrier beach that is now the Lido, a built-up summer resort area that some might call Italy’s version of the New Jersey shore. The Romans probably inhabited Torcello in an earlier time. Traces of their glassware have been found, but no information about settlement is in Roman records.

During the later Dark Ages, the island grew into the region’s major city, benefiting from the ability to harvest plentiful quantities of salt and an easily accessible port for trade. While Venice at the time was a tiny outpost, Torcello grew prosperous enough to support creation of a major ecclesiastical complex crowned with the solemn Byzantine basilica known as Cathedral of Santa Maria Assunta. The cathedral, its dazzling mosaics and the adjoining medieval Santa Fosca church and towering campanile remain to this day. The campanile is not only an architectural marvel for its time but offers great views of Venice and, in clear weather, the Dolomites. What is believed to be a bishop’s chair, carved from a single block of stone, stands before the two churches. Legend says unmarried people who sit there will find love within a year. This complex of holy sites, a surviving administrative office that now houses the museum of local artifacts and a few small homes, restaurants and villas comprise the few structures on the island, which at its peak may have been home to 10,000 people.

As the first millennium drew to an end, sand began to fill Torcello’s harbor, clogging its port and impairing its trading advantages, while nearby Venice began to grow in population and importance. Then, as a result of the particularly swampy environment and the accompanying propagation of mosquitos, Torcello suffered a terrible outbreak of malaria. It became all but abandoned, as residents escaped to Venice or elsewhere. The industrious Venetians stripped the island of all rock that composed its structures for building their own city, so today almost nothing is left but low shrubs, trees and wildflowers. They sway in a fragrant wind from the vegetation and the sea. 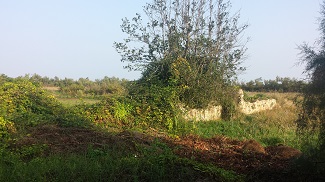 It’s a miracle that the basilica survived, because it houses one of the artistic gems of Italy and all of Europe. Filling almost the entire back wall of the church is a perfectly preserved glistening mosaic . It reveals much about artistic passion of the local people and the medieval concept of the Last Judgment, the Crucifixion and hell. Stunning mosaics of saints, alive with color, adorn the opposite walls. These are the oldest and largest surviving mosaics of this era, and they, combined with the hauntingly serene, otherwise stark interior, create a sense of awe, even for nonbelievers.

A Short Escape for the Rich and Famous

For centuries after its demise, history and people bypassed Torcello. The island most likely would have been nothing more than a stop for aficionados of medieval architecture and art if Giuseppe Cipriani hadn't arrived. In 1935, he bought an old inn and transformed it into a getaway that over the years has attracted the wealthy, royalty, movie stars, writers, musicians, painters, political leaders, and others. The inn and its restaurant remain in the hands of the founder’s descendants, and it maintains the original serenity and refined taste that make it an attractive destination. It also offers relaxed fine dining and relaxed country lodging at lower prices than comparable establishments in Venice.

The list of people who have escaped to Cipriani goes back to the 1930s. Charlie Chaplin was one of the first notables to come. Ernest Hemingway came to write his book, “Across the River and Into the Trees,” and returned for a visit with his wife. The author Somerset Maugham also visited. Royal visitors over the years have included the Italian royal family; Queen Elisabeth II and the Duke of Edinburgh; Edward Duke of Windsor and Wallis Simpson; Lady Diana and Prince Charles, and other nobility from all over the world. Political leaders have included Francois Mitterrand, Valery Giscard d’Estaing, Jacques Chirac and Winston Churchill.

Fortunately, the inn and its restaurant’s reasonable prices make this an escape for almost any visitor to Venice seeking the stillness of what really is a ghost town at night. Don’t come here to celebrity watch, because the timing may not work. Come here for the special setting they enjoy. Garden dining on a warm afternoon on the terrace or before a fire in the dining room is a special experience. A creative, graciously served menu provides a refreshing break from the selection of risottos, pasta and carpaccio that seems to adorn almost every Venetian restaurant menu.

To see more of the island, you can visit the nearby Casa Andrich, which bills itself as a museum of modern art. It is on private grounds about 100 yards from the public path that runs from the vaporreto dock to the church. The Casa Andrich also houses a small B&B. 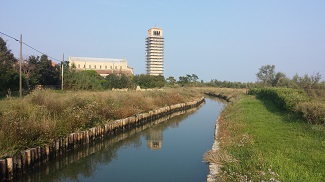 Another way to experience this peaceful island on foot is to take a short detour across the so-called Devils Bridge that spans the main canal leading to Cipriani. After crossing the rail-less bridge (be careful), visitors can walk a short way on a foot path, then turn left toward the campanile. In about 50 yards, turn left again to enter the grounds of the Cipriani and the main path to the church. Though only a short distance, this detour is long in beauty and tranquility. You pass a small olive grove and see green fields, low brush and the ancient campanile. See A Recommended Walk.