Hiking Chattanooga highlights dozens of trails within a one-hour drive of the city with detailed information, maps and ratings.

Nearby Prentice Cooper State Forest offers 35 miles of hiking trails, most of them through a dense forest with impressive stands of beech, oak and other trees (and mountain laurel) offering occasional views of the Tennessee River and Gorge. Be sure to print out a map before you visit. Shortest walks to get views are to Snooper’s Rock and to Mullen’s Cove. See park map. 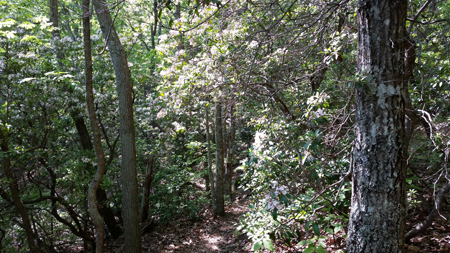 Lookout Mountain provides a wide variety of walks through rock formations and old forests on rugged trails and broad bridal paths, much of it on land that was the site of a Native American community and later a major Civil War battle; a free map is available on the website. One can hike up the mountain using some of the same paths as the Union soldiers who captured the mountain.

Chickamauga Battlefield National Military Park has an extensive trail network, some of it unfortunately in poor repair because of government budget cuts. These trails have even greater significance than most footpaths because they crisscross a battlefield of enormous historic importance left much as it was at the time of the battle.

Signal Mountain Park to the northwest of Chattanooga is atop another one of the steep hills that became suburbanized, in part on account of the smog during the late 19th and 20th centuries. This location was used by the Union Army during the Confederate siege of Chattanooga to indicate to Union soldiers when precious supplies were arriving by river.