The Highlights: A wide range of Upper Midwest natural beauty, outdoor activities for all seasons, hiking and biking trails, an expanding downtown with new restaurants, shopping and nightlife.

Other Places Nearby: Theodore Roosevelt National Park and the city of Medora, a large number of “world's largest” statues (the world's largest Buffalo in Jamestown, also home to the Natiional Buffalo Museum, and Salem Sue, the world’s largest cow, in New Salem), food festivals and events inspired by German and Scandinavian culture.

Meeting & Event Options: The Bismarck/Mandan region offers 3,500 sleeping rooms in more than 26 hotels, a convention center with 100,000 square feet of exhibit space, more golf courses per capita than any other state, 3,500 acres of parks and over 70 miles of recreational trails.

Once known as the “Wickedest City in the West,” the city of Bismarck, ND, has enjoyed a rich and infamous history – from Native American culture and the Northern Pacific Railroad to UFO sightings and prohibition-era underground bars. Although the saloons, brothels and gunslingers may be long gone, present-day Bismarck continues to attract visitors who wish to enjoy the fruits of the state’s recent oil boom, as well as its many natural and historical wonders.

A bit of history: The land that is present day North Dakota was acquired as part of the Louisiana Purchase in 1803, but the region was largely unsettled throughout the 19th century. Famous explorers Lewis and Clark spent the winter of 1804-1805 at a camp near what is today known as Washburn, about 40 miles north of Bismarck. During their stay, they met Sacagawea, a Shoshone woman who would become their translator and guide. Today you can visit the North Dakota Lewis and Clark Interpretive Center and Fort Mandan to explore this storied past, just a short drive north of downtown.

It wasn’t until 1861 that the Dakota Territory was established, which includes present-day North and South Dakota, as well as parts of Montana and Wyoming. However, settlers didn’t arrive in large numbers until the Northern Pacific Railroad began construction of the northern transcontinental railroad. By 1872 the railroad reached the Dakota Territory, and the town of Edwinton (renamed Bismarck one year later) was established as the point where the line would span the Missouri River.

That same year, Fort McKeen (later renamed Fort Abraham Lincoln) was built, commanded by the infamous Lieutenant Colonel George A. Custer, who gained notoriety for Custer’s Last Stand at Little Bighorn in 1876. Visitors can explore the fort today and take in hiking trails, sleep in tipis and visit a recreation of Custer’s home.

Panic ensued after the Northern Pacific filed for bankruptcy, construction of the railroad ceased and the company ended its service in Bismarck for nearly 10 years. Yet as luck would have it, the city was revived after gold was discovered in the nearby Black Hills in 1874. The gold rush to the region lasted until around 1878, with prospectors traveling to the rail’s terminus in Bismarck and setting out to the Black Hills from there. This sparked the city’s initial growth, and during this time Bismarck earned its title of “Wickedest City in the West,” with railroad workers and gold prospectors filling the area’s saloons, gambling houses and red-light district.

The McKenzie Hotel (later renamed the Patterson Hotel) opened in 1911 and was known for offering the most luxurious accommodations between Minneapolis and Seattle. The hotel secretly served alcohol during prohibition and hosted illegal gambling as well, which makes it a perfect setting for one of the area’s most beloved bars and restaurants today: Peacock Alley American Grill and Bar, which is located in the former hotel’s lobby.

The stock market crash of 1929 and the Dust Bowl years, which lasted throughout the 1930s, greatly affected the state’s agriculture, and many people abandoned their farms to move into the city – Bismarck’s population more than doubled between 1920 and 1940. A fire destroyed the State Capitol in 1930, and the state was forced to construct a new building in the midst of the Great Depression. The resulting 19-story art-deco skyscraper was completed in 1934 and is today considered an architectural landmark – take a tour of the building and enjoy the gorgeous 360-degree views of the city from the top.

UFOs, Oil and a New Kind of Boom

Following World War II, Bismarck’s population nearly doubled again between 1940 and 1960, reaching just over 27,000. The city was also a UFO sighting location in 1953, when what was described as “red glowing light making long sweeping movements” was detected on radar by the Air Defense System, with several Air Force officers said to have witnessed the object. Prior to its sighting in Bismarck, similar objects were reported throughout western North and South Dakota, and two F-84 Thunderjets were dispatched from Ellsworth Air Force base to investigate them. Another Air Force pilot was witness to the object hovering over the capital city as well. Named the Ellsworth Case, these incidents are noted as being one of the most significant UFO sightings due to the heavy documentation produced by the Air Force during its investigations.

Although slightly removed from the booming oil country of western North Dakota, Bismarck has definitely felt its effects. North Dakota built new housing faster than any other state from 2010 through 2014 as people came looking for work, and the population figures are even more astounding. The North Dakota Census Office projects the state population will grow to 842,000 by 2025, despite the recent drop in oil prices, and should reach 800,000 within the next five years – 65,000 more people than currently reside in the state. For visitors, this means brand new hotels to stay in, a bustling downtown area that continues to see new restaurants and nightlife, and easier access to the gorgeous natural scenery and history of the area. 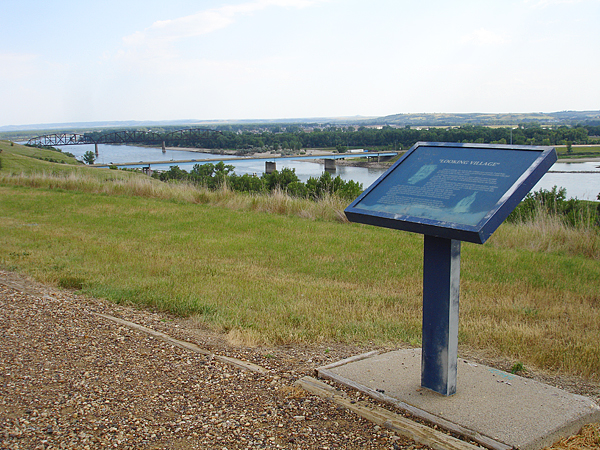 The Bismarck Parks and Recreation District oversees numerous parks, trails and sporting opportunities in the city. From golfing to swimming to renting shelters, ice skating or hitting nearby trails, start with parks and recreation for the latest information on what's available seasonally. For the hiking and biking crowd, Bismarck offers a number of multi-use trails that are great for both hiking and biking. The city has named and measured many of the trails in numerous handy maps so they are extremely user friendly for the novice or the expert. Try the River Buffs Mountain Bike Trail for incredible views or the Chief Lookings Village Trail for an educational look at the layout and features of the Earthlodge Village occupied by the Mandan Indian Tribe dating back to 1675.