Where the Rivers Flow Together

Other Places Nearby: Catskill State Park, Bethel Woods Center for the Performing Arts (location of the Woodstock Music festival) 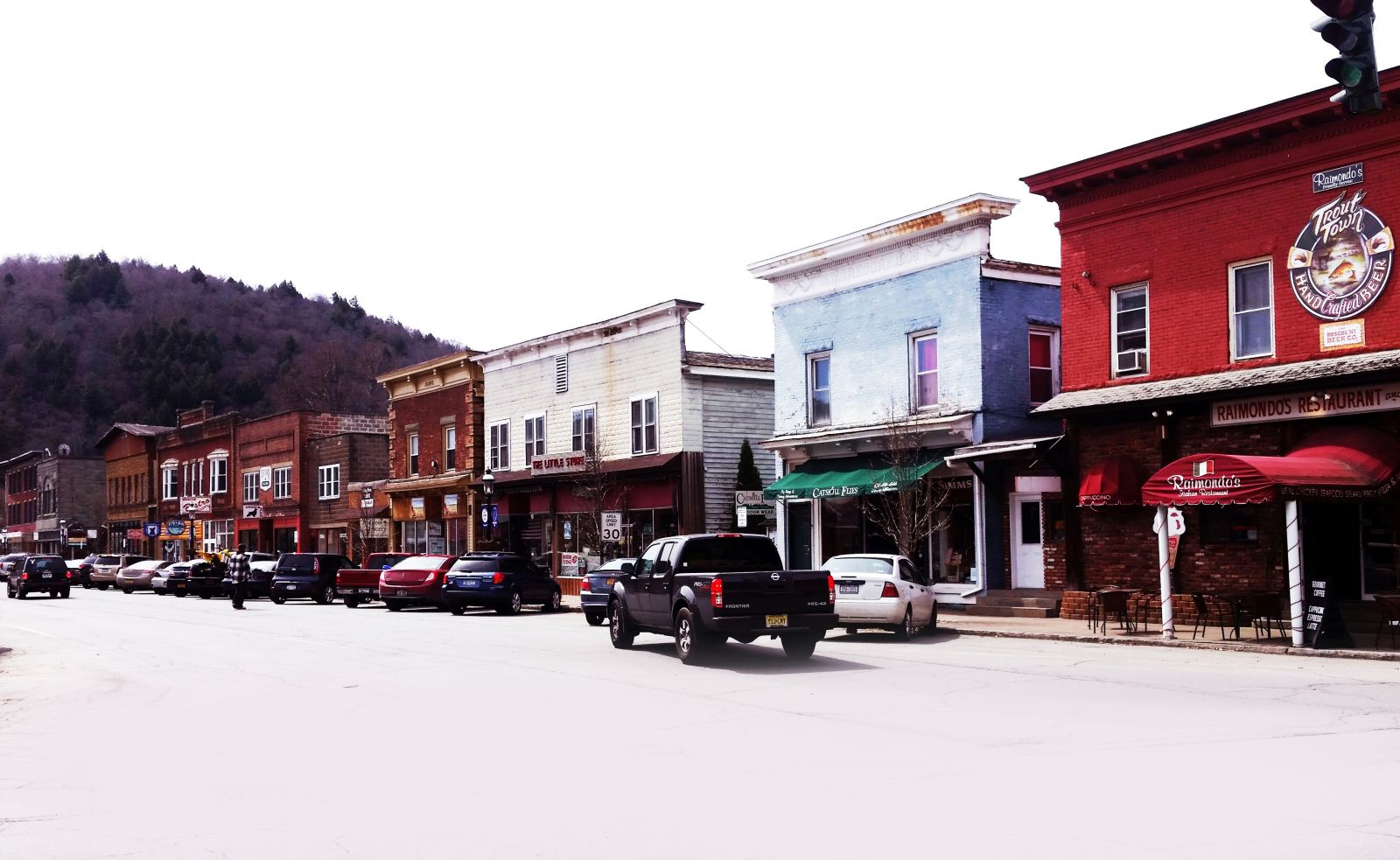 Little appears to have changed in the river valleys and mountains in the Southern Tier of the Catskills since white settlers first trickled in during the 1700s. That’s part of the appeal of this strikingly scenic area of rivers, forests and mountains less than three hours by car northeast of Manhattan. The region around the 25 miles of river valley and hills between Roscoe and Hancock, NY on Rt. 17 makes for great short escape from New York City; it’s an area with a growing number of lodging and dining options that is on the verge of more change than any time since the mid-1870s and the arrival of the railroad…but that’s not saying much.

That’s because this region has never really experienced a true boom or bust, despite the railroad’s coming in the late 1800s. The general population never reached any great peak, most tourists never came much closer than the famed Catskills resorts closer to New York City, and while the fertile fields in the river valleys, rich woodlands and famous blue granite of the surrounding mountains created a living (and even wealth) for some local residents in the 19th Century, time has done little to change these towns. The area’s most enduring industry, and what gives it worldwide renown, is its famed trout fishing. The rivers known as the East and West Branches combine just south of Hancock into the Delaware River, and the world-class Beaver Kill and Willowemoc Creek feed into the East Branch, creating a network of trout streams that attract serious anglers and even political leaders and celebrities from around the world.

The Coming of the O&W
The arrival of the O&W Railroad, since discontinued, or the Rt. 17 highway built in the 20th Century to connect New York City, Binghamton and beyond brought little change to the area. The original railroad investors presumably hoped that the trains would replace the rafts that brought the area’s plentiful hardwood lumber to market—it was wood from these areas that formed the core of Babe Ruth’s bats and those of many other players—and to ferry New York City residents seeking summer homes upstate and/or to enjoy the area’s great fishing and hunting. Even in the mid-1800s, fly fishing here was all the rage, made famous by a reclusive fisherman and outdoor writer named Theodore Gordon, a legend whose fly-fishing techniques live on to this day. Trout fishing became so popular that the railroad was used to stock the rivers from a fishery near New York City that eventually was replaced by one nearer by. Still, none of this was enough to bring sustained prosperity to the area, and to this day many of the small towns and homes look tired with age.

Despite the small fluctuation in population over the centuries, the area’s history displays some of the same struggles and eccentricities common in U.S. history. A local 19th-Century historian tells the story of a bloody dispute between Native Americans and early settlers around the time of the American Revolution. The distrust fomented during this time between Patriots and suspected Tories among the tiny population was such that one unfortunate settler trying to alert other settlers about potential raids by Native Americans was instead jailed on suspicion of spying.

Settlers to the area consisted mostly of a few Swedes, later Germans, Irish, some French, and eventually a small group of Eastern European Jews. These families sprinkled the valleys with small communities, farms, lumber operations and quarries, and others benefited from the ample game in the mountains and valleys and the plentiful fish and eels in the river even before the arrival of sports fishermen. Today, most of the farms are gone, with most of the area now returned to forest. Bald eagles are common in winter, and bear, deer and wild turkeys roam the forests again.

Where the Wealthy Come to Disappear
Perhaps because of its isolation, this little-known area has had a connection with the rich and famous from the early days of European settlers. The first landowner of the area was the illustrious Livingston family of Revolutionary War times, although the family sold off much of its land in the early 1800s. During both the 19th and 20th Centuries, the rich fishing grounds and good hunting in the area attracted wealthy outdoorsmen who quietly bought up lands and built country homes outside of the limelight of better known getaway locations on the East Coast such as Newport, RI, or later the Hamptons on Long Island.

One local notable early in the 19th Century built the extraordinarily elaborate Dundas castle, constructed almost entirely of stone and other materials imported from Europe, but he died before its completion and his wife was apparently too mentally ill to ever occupy it. While one of the most ornate structures in the region, and a striking ruin, it was rarely occupied, is under private ownership and is off limits to visitors at the present time.

Another oddity sadly not open to the public is the enormous stone mausoleum one can see in the distance through the trees on the top of Point Mountain, just above Hancock. The area’s local coroner and doctor built this palatial structure in the mid-20th Century to house his family’s remains. He and his relations were interred there only until the 1960s, however, because the high cost of upkeep was not sustainable. So the good doctor and his family were disinterred, the elaborate structure abandoned, and it now lies in ruin hidden in the forest, off limits to visitors.

Today the region remains home to many successful people who presumably come here for the beauty, peace and anonymity. The Trump family has a home on the Delaware River near Hancock, presumably to access the area’s great fishing and hunting far away from the flashing cameras. Just north of Roscoe in the area of Lew Beach, Laurence Rockefeller, a lover of nature and this region, bought up land during the 1980s, subdivided it, and sold the parcels over the years to like-minded wealthy preservationists. They agree to zoning rules that forbid any home from being in sight of another and to many other restrictions to protect the environment and preserve the land, but they share 40 miles of private cross-country skiing trails, private fishing rights on the Beaver Kill and other benefits. Rockefeller also bought and restored the Beaverkill Valley Inn, which is a rustic but high quality inn in a beautiful location with its own stretch of river and the ability for guests to take trout fishing lessons. Note: All fishing here is catch-and-release.

Could Change Be Coming?
While it’s unlikely that anything will happen to detract from the appeal of this wonderful escape, there are lately stirrings of change, in large part due to Airbnb, which has over the last few years created a growing inventory of agreeable places to stay in an area that traditionally had a very short supply of comfortable lodging beyond rustic motels and cabins for anglers. The ability to gain extra income from a country home has attracted New Yorkers, who are buying up and renovating properties with the prospect of offsetting some of the costs with Airbnb. The growing number of visitors has in turned driven up demand for quality dining, which has created opportunities for local farms and fishermen. New inns and old are being upgraded to attract both individual travelers and weddings, reunions, corporate retreats and small meetings. A New York City couple has developed Handsome Hollow specifically for weddings (See Event Venues.) just outside of Hancock, which itself is becoming a destination for both urbanites and people from all over the world.